What is the Significance of Shaving One’s Head?

“The human body is a highly sophisticated machine. The Creator has made this so complex and sophisticated. Sophistication is not just to make it complicated, sophistication means there are more possibilities than a simplistic machine.”

Within the ashram and also outside in many places, there are monks who shave their heads and there are those who will not cut a single hair on their body. What is the difference between these two aspects?

Have you noticed, if you prune a tree, the tree focuses its energy towards the pruned area and the number of leaves that come out in that part of the tree in the next fifteen to thirty days are much more than in other parts of the tree? This happens because the tree directs its energy in the direction of the pruned area. The same thing happens in your body. If you suddenly remove your hair, you will see the energies will move in that direction. People who are doing certain type of sadhana (spiritual practice) want that to happen. They don’t just shave their head whenever they feel like it. They shave their hair on shivarathri, which is one day before amavasya or the new moon, because on that day, on the amavasya day and the next day, there is an upsurge of energy in the human system, which we want to accelerate a little more.

The hair is taken off on that day because there is sadhana attached to that. If there is no sadhana, it won’t make much of a difference. Some of you may know that sometimes, if women who have never shaved their head in their life shave their hair, they become mentally imbalanced because they are unable to handle the excessive energy in that direction. If there already is a small imbalance, it exaggerates itself. But if it is calibrated properly and the necessary sadhana to support it is there, it works to your benefit. A spiritual seeker or a sadhaka who is not only seeking for his spiritual wellbeing, but who is seeking to become an instrument of a larger possibility, wants to use every little support available in nature. Shaving one’s head is a part of that.

When someone reaches a state where his energies are really bursting out of his head, if he activates the two chakras which are above the physical body, then he will not shave. In fact, we would like to grow the hair and tie it up just above that so that it is protected and nurtured. If there isn’t enough hair, we use cloth. Once the two chakras above the physical body are on, it is a phenomenal possibility but it also makes the physical body a little fragile. It tends to draw more than it should and this is the reason a lot of yogis die before they are thirty-five, because they attain to a certain level of energy but they don’t know all the different aspects of the body; they do not understand the mechanics of how the human system functions. The human body is a highly sophisticated machine. The Creator has made this so complex and sophisticated. Sophistication is not just to make it complicated, sophistication means there are more possibilities than a simplistic machine. 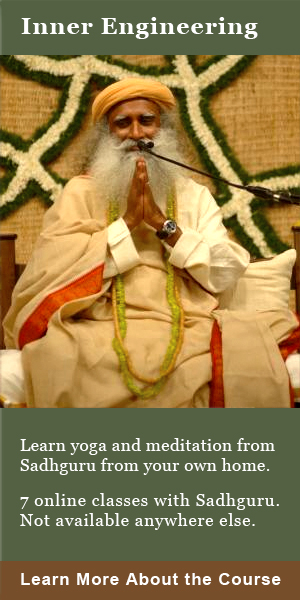